The path that I followed in the desert dissipated under my feet. Then, three old friends joined my side. Their names:

Faith, Hope and Love. They said, “we will escort you. Do not fear. God is with you in the forest deep and dark. Every man must go alone. You must trust.”

Trust, another entity, took the lead. I began the journey.

The forest is dark and deep and the trees, which some are dead, vastly grow. Some trees young and some old and some rotten share the space. However, together the enormous group of all types become one. It seemed they all have a role. None are common, even though, some appear handsome, some grand and some quite irrelevant, all are a piece of the puzzle. Despite their outward appearance, in totality, they represent the whole of this forest. Each are profound.

This is when, I decide to wander deeper into the green forest mystical fog. It seems the woods call me by name and they whisper wisdom and truths. I can’t resist the call nor the hypnotic beauty they pocess. To some in the desert, the forest seems mysteriously evil and frightening. But I, find it breathtaking, alluring and magnetic. I know I belong inside. This is/was my home but, knowing too, I was/am a mere babe, returning to my origins.  Simply, there was/is no other choice. The heat of the years cause me to wilt.

And~ (switch to past tense)

The temperature dropped as the shade of the canopy of trees welcomed me back. The coolness of shadows and the humidity embraced my body. Comfortable now, as the parched desert took a toll on my skin. It looked like a saddle and the sun did what it was suppose to do and cooked the frailness of human existence from me. The heat was the “refining fire” that The Bible, explains.

The tropical birds flew by my head! Oh my! I forgot about them and their array of colors. Greens to match the forest, oranges to show god’s royalty and blues to give me inspiration and my own palette of designs. Smiling at the gifts, I pressed forward.

The monkeys did not trust me. So, they watched my movements. Suspicious of my intentions, good or bad, they would find out my purpose. I greeted them honestly with a nod, “hello, I mean no harm.” They let me pass for now. They did not offer me food. They ate the fruit which their many bodies protected. “Food will come later, maybe.”

The flying creatures of the forest flitted contently from flower to flower, from creek to the water falls splash. Amazed, I stood watching. Delighting in that which others in the desert so feared. Bending down by the water’s edge, I cupped my hands and drank the fresh cool water.  To my surprise, I drank with another animal. It shared. This was the rule of the forest. The rules were not written or displayed. But, the rules were understood within the heart of everything that lived. And, if the rules were not abided by, then, the creature was expelled to the desert with “the humans.”

The humans, I dare say, captured, enslaved, ate and killed them for sport. The humans were considered, the demons. “The humans are to be feared.” And I, a human in their forest, recognized the fact, I am an intruder. But, they will trust me for a while. I will have to prove my integrity as a creature of God’s.

Needing a rest, I sat at the edge of a tree’s roots. Before falling soundly into a coma of sleep, I noticed the multi-colored green moss. It was damp, cold and sprung to new life. Small and delicate, the tiny leaves of multi greens invited me to observe it’s world. I looked harder, further, and magnified the mosses world in my imaginations. I saw another place, another home for strange odd life. Much different than my own, but also, dynamic, I saw. Then, fast asleep, I submerged. 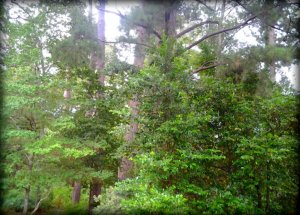 While sleeping, a man stood by my side. He is familiar. Quiet and male by energy, he stood with dowsing sticks. The sticks circled around and around, then, rested pointing west. With a look to the west, his eyes pointed. “This way is best.” This time, I chose not to rebel. The last time I said, “No,” I was his teenage daughter. This time, I will listen. Though he a man of few words, he will show me the right direction. We will not make the same mistake. See, I learned that lesson. I take my nap sack and head west. Then, my next snore occurs.

There are several dimensions here. This is only two; shown me. The ability to sleep and travel at the same time. Here in The forest, I know this is true and possible. In the forest the hidden mysteries are revealed.

It is also made known, I may return to the desert at any time. The choice mine. No one makes another. There is no one to blame there is no control, by another. Choices for good are here. Choices for destruction are in the desert.